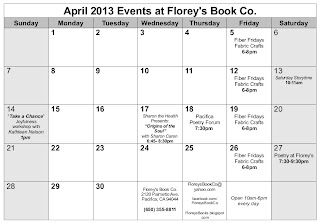 Remember that you can get more information on each event
as it approaches on our sites:

-"Take a Chance" Joyfulness workshop with Kathleen Nelson
Find out how to bring more joy into your life.
Sunday, April 14th, 1pm

-"Fiber Fridays", Knitting, Crochet, any sort of string craft,
Fridays 6-8pm All varieties of string and fabric craft are welcome!

-Saturday Storytime! Children's event,
the second Saturday each month, Apr. 13th, 10-11am
Bring the little ones and enjoy a fun story!

-Pacifica Poetry Forum, meets the 3rd Thursday of each month,
Apr. 18th, 7:30 pm. Come and share the joy of poetry!

-Poetry at Florey's, the last Saturday of the month,the 27th, 7:30-9:30pm
Featured poets, followed by an open mic. Share your poems, or just listen. 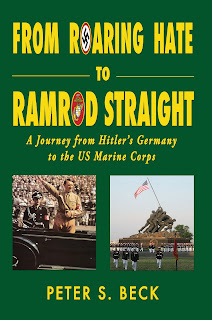 Florey's Books welcomes local author Peter Beck, as he discusses his new book "From Roaring Hate to Ramrod Straight - A Journey from Hitler's Germany to the US Marine Corps"

Peter Beck, a resident of Pacifica for the last 22 years, has just written a book about his life. On the surface, this might not sound very interesting. However, it takes only about two pages to realize this is no ordinary autobiography.

Born in Berlin in 1935, his family luckily escaped the clutches of the Nazi's solely on the basis of his father's valorous acts in combat during World War One. Flying out of Berlin in 1939, he and his mother and father landed in Genoa, Italywhere they were able to board a ship which took them to Guayaquil, Ecudor. Once in South America, the family settled down only to be uprooted again when the author contracted Tuberculosis, which enabled the family to immigrate to the United States for treatment.

Arriving in New York City in 1940, the book details the experiences of growing up in New York City in the 1940s and 1950s, and then details a 23 year career as an infantry officer in the United States Marine Corps, a career that took him all over the world and included assignments as the Guard Commander at Guantanamo Bay, Cuba; the Director of the Marine Corps Drill Instructor School; and 13 months of combat with an infantry battalion and regiment in the jungles of Vietnam.

Staff assignments in Washington, DC and Honolulu, Hawaii give the reader an insight in to a military organization that no longer exists.

The author is non-judgmental, relating his story in a factual manner, straying from his observational style only during the chapter on Vietnam where he writes from first-hand experiences and occasionally allows his emotions concerning the war in Vietnam to override his journalistic style.

The book is a wonderful snapshot of two eras that no longer exist. A vibrant and dynamic 1940s New York City, and the post-Korean War Marine Corps leading up to our entry into the Vietnam War. As the author states "It's like the Brooklyn Dodgers and the New York Giants, great while they lasted, but never to be again." 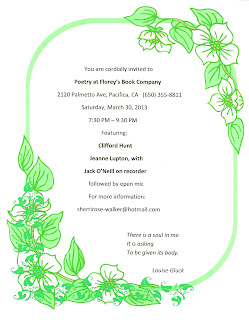 The featured reader this month is Tim Ferrari. He will be followed by an open mic period.
The Forum is open to the public and is free of charge. The Pacifica Poetry Forum meets monthly,
the 3rd Thursday of each month. Come and share the joy of poetry.

Next, is the March Poetry at Florey's event:

The featured poets this month are: Clifford Hunt and Jeanne Lupton with Jack O'Neill on recorder. The featured poets will be followed by an open mic period. Open mic sign-up is first come, first served. This event is also open to the public and free of charge. 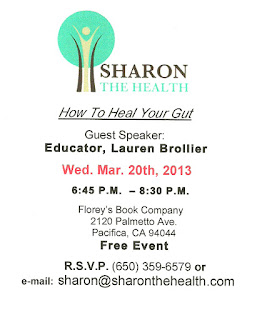 Do you suffer from chronic heartburn, burping or acid reflex?
These symptoms may be just the beginning of something more serious.
Without intestinal health, we have no health at all.

Don’t miss this presentation:
How To Heal Your Gut Naturally!
Educator Lauren Brollier will be sharing step by step how she did just that.

This might be a difficult topic to talk about so just come, relax, take notes and ask questions...

Posted by FloreysBookCo at 1:39 PM

How to Raise a Happy Child (and be happy too) Book Event with authors Heather Criswell & Taryn Voget, Mar. 16th at Florey's! 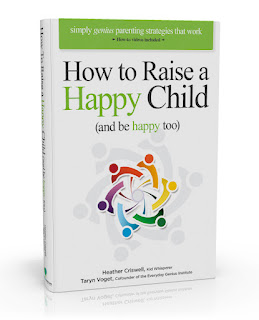 Florey's Books welcomes local authors Heather Criswell and Taryn Voget as they discuss their new book "How to Raise a Happy Child (and be happy too)".

'How to Raise a Happy Child (and be happy too)' is no ordinary parenting 'how-to' book. You will discover how to feel like a parenting pro. You will get an opportunity to step inside the mind of kid whisperer Heather Criswell and understand how she discovered (over 25 years and 30,000 kids) what works with every child, in every situation, every time.

This book is a totally refreshing new approach to parenting. Inside, you will get:

- Step-by-step techniques for getting what you want without using the word "no", time-outs, or rewards
- Simple strategies to bring out the best in your and your child every day
- Amazing tools for creating a stress-free environment
- 22 scenarios with the exact words to use in common situations to get the results you desire
- 8 how-to videos included so you can see the body language, words, and voice tone that get results

Most other parenting books or advice focus on how to use control, discipline, punishments and rewards to get the desired behavior. The techniques presented here offer an inspiring, different new approach for parents who want to raise children who thrive, and have fun doing it.

Heather Criswell is a kid whisperer who has spent 25 years working with over 30,000 children. She is a parent coach, a keynote speaker, and an author, sharing her unique approach and wisdom with families around the world.

Taryn Voget is the cofounder of the Everyday Genius Institute. She is the author of six books on genius, a frequent keynote speaker, a consultant, a coach, and a thought leader on genius and human potential.

They both live in the San Francisco Bay area.