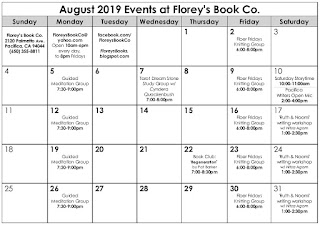 -Saturday Storytime! Children's event,
the second Saturday each month, August 10th, 10:00-11:00am
Bring the little ones and enjoy a fun story!

-Pacifica Book Club
Get to know your neighbors, read and discuss the book of the month.
This month: 'Regeneration' by Pat Barker
All are welcome to join!
Thursday, August 22nd 7:00-8:30pm 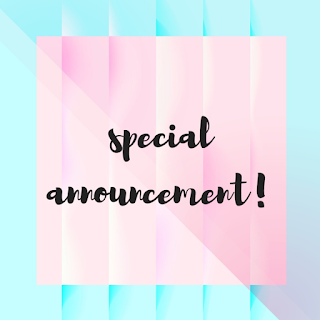 Please note, Florey's Books will be closed July 30th and 31st, 2019 for a family vacation.

We will resume normal hours August 1st. We apologize for any inconvenience.

Thank to all our friends and patrons, we hope to see you soon. 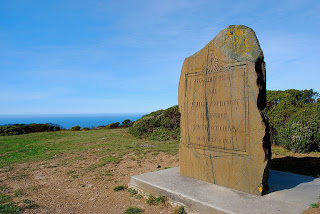 Florey's Books welcomes local speaker and author Ken Miles as he discusses,
The ’Discoveries’ of the Golden Gate and San Francisco Bay,Exploring the Silent Pages of History and More.

For many years Ken Miles interest in Spanish explorations of early California grew as he read about and studied Native American history and cultures. As he read various accounts about early Spanish explorations in Alta California, he found there were often minor errors and omissions here and there and wondered why there were often different accounts provided for the same historical events. He found the pages of history are like pieces of a puzzle that had fallen to the floor and later reassembled, missing pieces here and there, and some pieces placed where they don’t belong. Why were some obvious chapters of history omitted? Could it be the authors preferences or biases that influenced how they viewed history, or could it be from errors or omissions when citing firsthand accounts, secondhand or thirdhand accounts? Could it be the errors made when translating notes and diaries written in older Spanish dialects (Castilian, Andalusian, Catalonian, or other dialects), or from Spanish into English?
This is an investigative study that searches for answers, an attempt to place the missing puzzle pieces where they belong. This is a story primarily about the Spanish explorers, also known as “conquistadors”, and Spanish Franciscan missionaries, of what took place, when and where and by whom. This story is also the indigenous people of coastal Alta California, Spanish ships of the Spanish Manila and China Galleon, pirates, expansion of the dreaded Russian and English empires, and possible visitations to Alta California by other non-indigenous people. Why did they all come to Alta California?
Gaspar de Portola, an aristocrat born in Spain, was selected by the King Carlos III of Spain in 1767 to be the Governor of Baja and Alta California and to lead an overland expedition to Alta California to establish presidios and missions at San Diego and Monterey, thus securing Alta California from Russian or English control. Portola led the expedition to Alta California during 1769-1770. Additional expeditions were later lead by Captains Fages, Rivera and De Anza, each to further define what Portola’s expedition missed or failed to accomplish. There are many important people covered in this story, and included in this partial list: Capt. Sebastian Vizcaino; English pirate Francis Drake; King Charles III of Spain; Viceroys Croix; Viceroy Burcareli; Visitor-General Don Jose de Galvez; Captain Fernando de Rivera y Moncada; Lt. / Capt. Pedro Fages; Capt. Batista de Anza; Lt. Gabriel Moraga; Lt. Miguel Costanso; Sgt. Jose Francisco Ortega; Father-President Junipero Serra; Padre Crespi; Padre Palou; and Padre Font.

At the top of Sweeney Ridge is the site of the National Monument commemorating the Gaspar Portola Expedition Sighting of the San Francisco Bay in 1769. This year will be the 250th year anniversary since that first sighting. Ken has read many accounts and documents that paved the way and surrounded this event, subsequent events resulting in intended and unintended consequences. This is story that should be told. Ken is ready to tell you the story and hear your thoughts.

Returning home, Ken studied biology and the sciences at San Francisco State, earning a bachelor’s degree in Ecology and Systematics, and attended graduate studies in Biology, while working at UC Berkeley’s Lawrence Lab alongside researchers and physicists. Sometime later, he joined the U.S. Food and Drug Administration (FDA) as a radiological health and medical device investigator and specialist. His job required extensive travel around the country, Canada, Europe and Asia to inspect manufacturing facilities and to determine whether the companies’ manufacturing and testing operations, products and labeling complied with FDA and international regulations and standards. Managers and staff were interviewed, and records reviewed to determine whether the firm was following required regulations. The work of the FDA investigator involved cross-comparing written procedures, actual production and test reports, statements people made versus actions and procedure, statements to assess compliance with FDA and international requirements. After 30 years of government work, Ken retired and started a consulting business that including extensive business travel to Europe and Asia. The left side of Ken’s brain was well employed.
Now for the right side of Ken’s brain. Following the Navy, he continued traveling several years like a gypsy throughout Europe, Soviet-bloc countries, and parts of North Africa and the Middle East, staying off the beaten tourist track, yet spending enough time to visit museums to see the great arts, archeological sites, folk festivals, famous battle grounds and historic sea ports. Maps and books on history were Ken’s bibles. His lifelong hobbies include hiking, skin and scuba diving, fishing, being “on the water”, learning about early historical event and indigenous cultures, collecting Native American art and artifacts, and being involved in local environmentalist activities. Ken, along with Ferd Simon and Jan Dutton, were founders of Pacificans United to Save Our Hills (PUSH), a grass-roots group which from 1976 to 1984 worked with the community and various politicians to place Pacifica’s Sweeney Ridge into the Golden Gate National Recreation Area / U.S. Parks system. 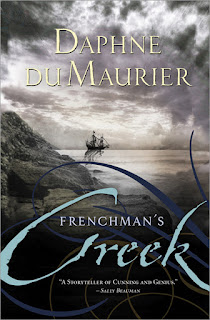 Come by for a chat about our July book, 'Frenchman's Creek' by Daphne du Maurier.

Jaded by the numbing politeness of Restoration London, Lady Dona St. Columb revolts against high society. She rides into the countryside, guided only by her restlessness and her longing to escape. But when chance leads her to meet a French pirate, hidden within Cornwall's shadowy forests, Dona discovers that her passions and thirst for adventure have never been more aroused. Together, they embark upon a quest rife with danger and glory, one which bestows upon Dona the ultimate choice: sacrifice her lover to certain death or risk her own life to save him. Frenchman's Creek is the breathtaking story of a woman searching for love and adventure who embraces the dangerous life of a fugitive on the seas.

Daphne du Maurier's 1938 novel Rebecca made her one of the most successful writers of her time. Alfred Hitchcock's adaptation of the book won the Best Picture Oscar in 1940. He later used her material for The Birds. In 1969, du Maurier was created a Dame of the British Empire. 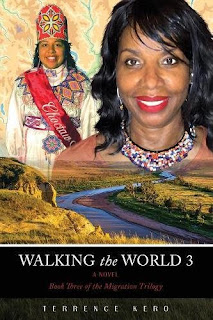 Walking the World 3, Book Three of Terrence Kero’s groundbreaking trilogy about human migration, tells the story of how hunter-gatherer clans left Africa some 80,000 years ago, eventually migrated to Siberia, and walked across the Bering Land Bridge to North America during the last ice age, 12,000 to 24,000 years ago. Over the millennia, the Americas were populated by these ancient clans, the ancestors of today’s indigenous tribes. The novel opens in 2015, when Hanna Koskinen, an anthropologist and expert in human migration, presents two papers at an international conference on the first migrations from Africa to Europe and to Asia. In attendance is James Wellington, chair of the Anthropology Department at Stanford University, who is impressed and offers Hanna a postdoctoral fellowship to research the first migrations to the Americas. It is a difficult decision for her, because she is teaching at a university in Thailand so that her son, Chaat, can be close to his Thai grandparents, but she finally accepts. During her initial research at Stanford, she finds DNA data identifying the hunter-gatherer clans that first migrated to the Americas, but there are conflicting theories about when those first migrations occurred. That is the riddle Hanna must solve. Interspersed with the narrative of her research and her budding romance with James Wellington are stories imagining the heroism and tragedies of those first people and their descendants, along with revelations about unexpected connections between Hanna’s family and Indian tribes in Mississippi and Brazil.

Terrence Kero, a retired electronic engineer holding patents in computerized speech recognition and high-speed networks, turned to writing historical novels more than ten years ago. His research and his journeys took him back to the earliest history of human migration to Europe, Asia, and the Americas. Among the hundreds of Native American tribes today, he has focused in this book on six tribes; the Choctaw, Ojibwe, Sioux, Seminole, Chumash, and Tupi, all proudly carrying on their heritage from the ancestors who were the first people to leave Africa and arrive in the Americas in the longest migration in the history of the world. Born in Moose Lake, Minnesota, he currently lives in Pacifica, California, with his wife, Takoma.

So, You Don't Think You Can Draw? event with Barbara McCarley! 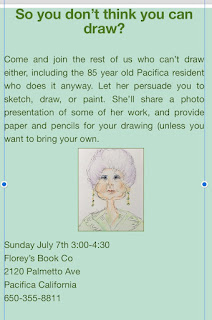 So, you don't think you can draw?

Come and join the rest of us who can't draw either, including the 85 year old Pacifica resident who does it anyway. Let her persuade you to sketch, draw, or paint. She'll share a photo presentation of some fo her work, and provide paper and pencils for your drawing (unless you want to bring your own).

Posted by FloreysBookCo at 2:10 PM