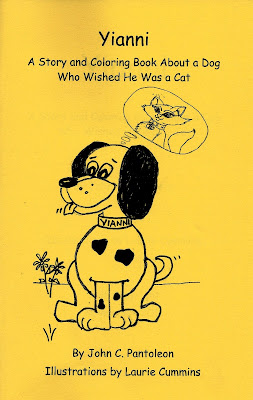 Florey's Book Co. welcomes local author John Pantoleon as he reads his new children's book, "Yianni, A Story and Coloring Book About a Dog Who Wished He Was a Cat"

The story is about Yianni, a dog who wishes he was a cat. He befriends a cat, and asks her to teach him to meow. Eventually, he learns that it is best to be what you are, and to be happy with yourself. It is a positive story for young children with charming illustrations by local artist Laurie Cummins.

John Pantoleon holds a B.A. in drama and a secondary education teaching credential from San Francisco State university. He has been active as an actor and director in Bay Area theatre for over fifty years. He is a founding member of San Francisco's Eureka Theatre. He served as presidnt of the Pacifica Spindrift Players for seven years and was involved in children's theatre both at PSP and in the public schools. He and his wife Kathy live in Pacifica.