"The Madagascar Pigeon" Book Event with Author John Thom, May 17th at Florey's! 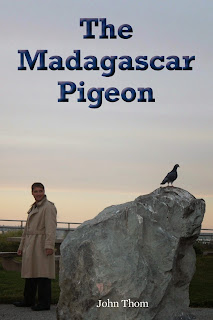 After a dame gives him a cockamamie story about a sea voyage, an East Asian souvenir, and some unwanted attention from a trio of hooligans, a statue of a bird drops in the lap of San Francisco private eye Jaguar Beault, triggering a comic romp. The adventure pits Beault against a cluster of gun-totin, obsessed and creepy villains of both sexes who hound him to turn over the repulsive bird and the hidden jewels and gems that ancient legends lead them to believe it holds. Does this sound familiar? Sure. The Madagascar Pigeon spoofs The Maltese Falcon, the acclaimed Dashiell Hammett-Sam Spade mystery born on the foggy streets of San Francisco. He’s not quite Sam Spade in the clutches of The Falcon, so Jaguar Beault goes to his detecting roots, including pluck and friends, to try to stay alive as he looks down the barrels of a slew of pistols and plots the exposure of a murderer. Along the way, he falls into impossible love with a beautiful lesbian who says Beault’s gay brother is a dreamboat. Beault captions this “the shipwreck of his love life.” San Francisco’s top homicide cop busts Beault’s chops every chance he gets. The odds are stacked against Mr. Beault, but take the points because there could be an upset. Crime capers can be funny even when bullets are flying.

John Thom has lived in Pacifica for three years in, as he boasts, the shadows cast by San Francisco’s unmatched vitality; he writes his stuff in pen on lined notebooks; and once he jumped from one side of the Mississippi River to the other side in a display of bold abandon. He is retired from the communications world. With his wife, two daughters and three grandchildren all nearby, he is enjoying the sights, sounds, aromas and funky lifestyle of the Bay Area. He admits he should have relocated to NorCal long ago. His first novel, The Madagascar Pigeon, is a spoof of The Maltese Falcon. Thom is well into creating three more novels in the Jaguar Beault thriller series. His publisher, Bat & Ball Press, brought out his acclaimed 'Champion Batsmen of the 20th Century' back when he was a practicing baseball historian. He and his missus love to travel. They have been in 49 of the 50 U.S. states.

Posted by FloreysBookCo at 5:27 PM