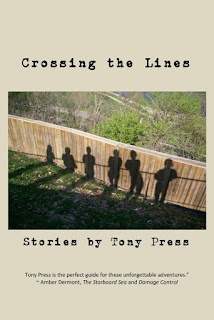 "Gentle Reader, welcome to the tender-hearted stories of Tony Press. In Crossing the Lines, hippies, poets, wanderers and thieves steal our hearts, not to break them, but to expand their beating chambers. Tony Press writes with care and precision about the quiet moments that swiftly and un-expectantly recalibrate our wavering lives. The strengths of these stories rest in their good humor and close attention to how we fall in love and how that love transports us into the dark and thorny depths of our own wilderness. Tony Press is the perfect guide for these unforgettable adventures." - Amber Dermont, The Starboard Sea and Damage Control

Tony Acarasiddhi Press lives near San Francisco and tries to pay attention. Sometimes he does. During a period of meditation on a retreat in 2003 he could barely sit still because a story was spilling into his consciousness. At the final bell he raced outside and wrote it down as fast as he could. He’s been writing ever since, primarily short stories, but also poems and essays. Since 2004 his efforts have appeared online and in print close to 100 times, including journals from at least five different countries. In 2014, Boston Literary Magazine nominated one of his stories for the Pushcart Prize. A few years earlier, JMWW had nominated another story for the Million Writers Award. He continues to follow a Buddhist path (hence the name Acarasiddhi), and struggles to sit still even without the intrusion of a story. His personal mantra is “keep walking” and he will do that as long as he can.