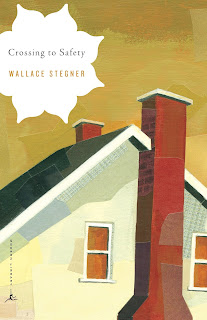 Come by for a chat about our November book, 'Crossing to Safety' by Wallace Stegner.

Called a “magnificently crafted story . . . brimming with wisdom” by Howard Frank Mosher in The Washington Post Book World, Crossing to Safety has, since its publication in 1987, established itself as one of the greatest and most cherished American novels of the twentieth century. Tracing the lives, loves, and aspirations of two couples who move between Vermont and Wisconsin, it is a work of quiet majesty, deep compassion, and powerful insight into the alchemy of friendship and marriage.

Wallace Earle Stegner (February 18, 1909 – April 13, 1993) was an American novelist, short story writer, environmentalist, and historian, often called "The Dean of Western Writers". He won the Pulitzer Prize in 1972 and the U.S. National Book Award in 1977. He wrote fourteen novels, seventeen works of non-fiction, and several collections. 'Crossing to Safety' was his final published novel.