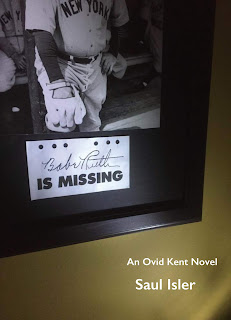 A broken bedroom window, stolen signatures, and potentially millions of suspects . . . former DEA agent and now rare book dealer Ovid Kent will need all the help he can get to solve this case and find the purloined penmanship. Oddly enough, he gets help from the least likely source, or is that just a hallucination brought on by a blow to the head? Throw in a beautiful nurse, an eventful trip back to his hometown, and it all adds up to a mystery that will have you wondering, will Ovid Kent strike out, or will he hit it out of the park?

Saul Isler has authored four novels, The Cave at Devils Elbow; and a mystery trilogy: Babe Ruth Is Missing; Shakespeare Is Missing; Jesus Is Missing (unfinished). This is Mr. Isler’s third book of short stories, preceded by The Man in the Parking Lot and The Blue Shoes, plus a humorous treatise on the solving of acrostic puzzles, The Majestic Acrostic. He’s been an ad man, journalist, newspaper columnist, restaurant reviewer and host of “Dining Out” on Radio Sausalito. His work has appeared in the San Francisco Chronicle, the Cleveland Plain Dealer, the Onion and in two anthologies, NPR’s I Thought My Father Was God and The Left Coast Writers’ Hot Flashes II. He is represented by Pocamug Press. A Cleveland native, he lives with his cat Nate live in Santa Monica, California where he may be reached at saulisler@gmail.com.