It Could Be Me, Although Unsure - Event with author Eileen Malone, Nov. 18th at Florey's! 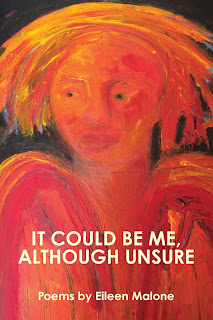 Florey's Books welcomes author Eileen Malone as she discusses her poetry collection, "It Could Be Me, Although Unsure".

Eileen Malone’s poems and stories have been published in over 500 literary journals and anthologies, a significant amount of which have earned awards, i.e., four Pushcart nominations. She has published a nonfiction book: The Complete Guide to Writers’ Groups, Workshops, and Conferences (Wiley, New York), a book of poetry: I Should Have Given Them Water (Ragged Sky Press, Princeton) and her award-winning chapbook: Letters with Taloned Claws (Poets’ Corner Press, Sacramento).

She grew up in England, Ireland and Australia and lives in the coastal fog at the edge of the San Francisco Bay Area with her husband Bob, three dogs, two parakeets, and one cat (all rescue) where she founded and now directs the Soul-Making Keats Literary Competition. She is a voting member of the Northern California Book Reviewers Awards, a mental health activist, host and co-producer of a television interview show for Access San Francisco Channel 29 and past teacher/coordinator for California Poets in the Schools and local community colleges.