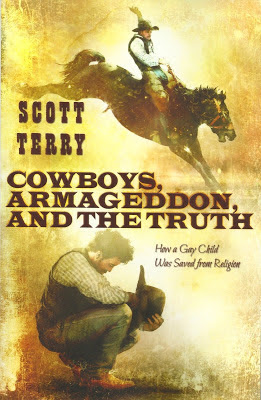 Florey's Books welcomes author Scott Terry as he discusses his memoir, "Cowboys, Armageddon, and The Truth:How a Gay Child Was Saved from Religion"

In Cowboys, Armageddon, and The Truth: How a Gay Child Was Saved from Religion, Scott Terry offers an illuminating glimpse into a child’s sequestered world of abuse, homophobia, and religious extremism. Scott Terry’s memoir is a compelling, poignant and occasionally humorous look into the Jehovah’s Witness faith—a religion that refers to itself as The Truth—and a brave account of Terry's successful escape from a troubled past.

At the age of ten, Terry had embraced the Witnesses’ prediction that the world will come to an end in 1975 and was preparing for Armageddon. As an adolescent, he prayed for God to strip away his growing attraction to other young men. But by adulthood, Terry found himself no longer believing in the promised apocalypse. Through a series of adventures and misadventures, he left the Witness religion behind and became a cowboy, riding bulls in the rodeo. He overcame the hurdles of parental abuse, religious extremism, and homophobia and learned that Truth is a concept of honesty rather than false righteousness, a means to live life openly as a gay man.

SCOTT TERRY is a freelance writer, watercolorist, installation artist and businessman. He has written for The San Francisco Chronicle, the Huffington Post, and his work has been covered by NPR, The Wall Street Journal, other popular media outlets. He lives in Northern California.