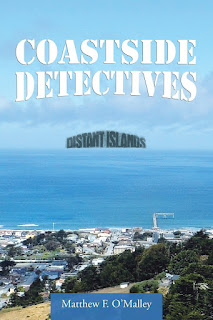 In Coastside Detectives, Distant Islands, the world-weary detective Mike Mason becomes embroiled in the local politics of coastal preservation when he is called upon to explain his involvement with an environmental activist found murdered; the body of which was recovered from a local garbage dump. Joined by his partner, Joe Ballard, the two private investigators embark on a quest to find the activist’s murderer and in doing so realize things are not always what they seem; that someone who had once taken only a keen interest in Mike Mason’s life story is now becoming an active player. From prowling the waters just off the California coast, to running up against a vengeful developer, to following a fresh trail of body parts, Mike Mason uncovers answers, is left with questions, and learns that he has become a target. Full of fast-paced action and darkly comedic, Coastside Detectives: Distant Islands is sure to thrill fans of old-school detective novels in the vein of Hammett and Chandler.

Matthew O’Malley was born and raised in San Francisco and is a current resident of the small town of Pacifica. A detective novel, film noir, and classic radio mystery buff, he is the author of several books and collections of short stories. This is the third novel in the Coastside Detectives series.