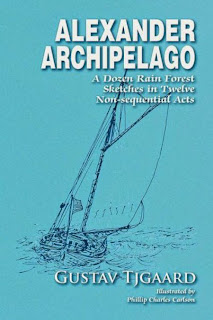 This eclectic series of twelve stories based on some of the life experiences of Gustav Tjgaard runs the gamut. The nonfiction narrative presents dramatizations set in the lush ambiance and grandeur of earth's largest temperate rain forest. The book is a picture album of life in Alaska's Tongass National Forest. These adventures and perilous undertakings occur in a forest of big trees, big birds, big fish, and big bears, where immense peaks are wrapped in great glaciers that break off into bays and fjords where big whales spout. The peaks are capped by perennial snows that form the highest coastal mountain range in the world, rising abruptly from salty coves to blue ice and black crags. Surely this is landscape to swell the soul and humble the ego

Gustav Tjgaard spent 25 years in Alaska's Alexander Archipelago. Now in his eighties, he views the sailor as a legitimate folk hero. Originally from Decatur Island, Washington, he currently lives in Pacifica, California. This is his third published book.