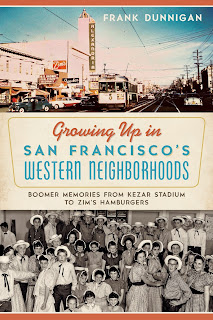 From football games at Kezar Stadium to a perfectly broiled Zim burger, San Franciscans have fond memories of the decades after World War II. Dressing up for a movie at the Fox Theatre on Market Street, catching the train at the old S.P. Station on Third and Townsend, taking the streetcar downtown to see magnificent displays in the Emporium's windows or spending a day at Golden Gate Park, the "outside lands" of San Francisco were teeming with youngsters and the young-at-heart alike. Western Neighborhoods Project columnist and San Francisco native Frank Dunnigan offers a charming collection of nostalgic vignettes about the thriving Western communities of unforgettable people and places that defined generations.

Frank Dunnigan was born in San Francisco during the baby boom years of the 1950s to a family that first settled there in 1860. His education began in Kindergarten at Parkside School before moving on to St. Cecilia's and then to St. Ignatius College Prep and the University of San Francisco. He worked as a bank auditor and as a retail training manager before joining the federal government in the 1990s. His monthly history column STREETWISE has been published by the Western Neighborhoods Project ( www.outsidelands.org ) since January 2009, and he has contributed both text and photo content to several local history books published by other authors.

Posted by FloreysBookCo at 8:04 PM