"If You Ask Me" Book Event with Author Anna Boothe, July 12th at Florey's! 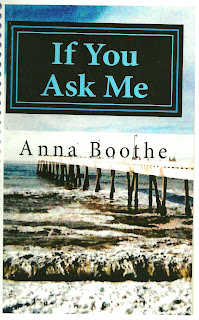 Florey's Books welcomes local author Anna Boothe as she discusses her new memoir, "If You Ask Me".

From Ms. Boothe: Someone gave me a book with blank pages and, being a writer, I must fill them up with a story, my story. And now, some five years later, it is time to begin...

I don't want to write your standard autobiography, beginning with my birth and going on year by year to the here and now. But I want to record the things, the people and the moments sometimes with pictures and my poems, that mean the most to me, that I want to save and share with anyone who wants to read this.

I am not -nor do I think I will be- a famous person, so there is no ready captive audience for this. but I would like to write this in a way that makes you want to "ask me" and read on...

Ms. Boothe was born in Chicago and spent her childhood in Kansas City, MO. She received a Bachelor's degree in journalism, a Master's in English, and a Master's in counselling. She has also lived and taught in San Miguel de Allende, Mexico. She is the founder of the Preserve Our Pier Supporters, which has generated almost $2 million in grants to repair the Pacifica Pier. She lives in Pacifica with her husband Gary, and their dog Louie.