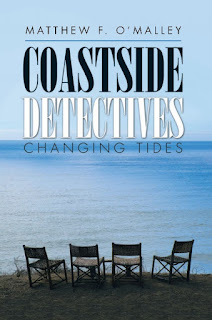 When a psychic warns Mike Mason of a death threat against his life and of dramatic changes in the lives of those around him, he brushes off these warnings with his usual sardonic wit; only to find himself waking up at a local hospital. Betrayals of close friends are soon uncovered as well as a compromised computer system which leads Mike Mason to the heart of San Francisco's Financial District, an organization bent upon international acts of terrorism, and an old nemesis. From high-rise gun battles to fire bombings of their offices and homes, Mike Mason confronts his ghosts and his past, finding both are intertwined in blood. In Coastside Detectives Changing Tides, the fourth book in the series, Mike Mason realizes the game has changed forever.

Matthew O’Malley was born and raised in San Francisco and is a current resident of the small town of Pacifica. A detective novel, film noir, and classic radio mystery buff, he is the author of several books and collections of short stories.