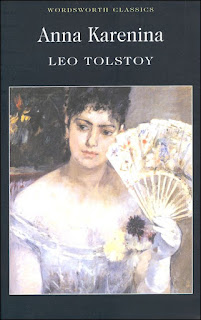 Come by for a chat about our February book, 'Anna Karenina' by Leo Tolstoy.

At its simplest, Anna Karenina is a love story. It is a portrait of a beautiful and intelligent woman whose passionate love for a handsome officer sweeps aside all other ties - to her marriage and to the network of relationships and moral values that bind the society around her. The love affair of Anna and Vronsky is played out alongside the developing romance of Kitty and Levin, and in the character of Levin, closely based on Tolstoy himself, the search for happiness takes on a deeper philosophical significance.
One of the greatest novels ever written, Anna Karenina combines penetrating psychological insight with an encyclopedic depiction of Russian life in the 1870s. The novel takes us from high society St Petersburg to the threshing fields on Levin's estate, with unforgettable scenes at a Moscow ballroom, the skating rink, a race course, a railway station. It creates an intricate labyrinth of connections that is profoundly satisfying, and deeply moving.

Count Leo Tolstoy was born on September 9, 1828, in Yasnaya Polyana, Russia. Orphaned at nine, he was brought up by an elderly aunt and educated by French tutors until he matriculated at Kazan University in 1844. In 1847, he gave up his studies and, after several aimless years, volunteered for military duty in the army, serving as a junior officer in the Crimean War before retiring in 1857. In 1862, Tolstoy married Sophie Behrs, a marriage that was to become, for him, bitterly unhappy. His diary, started in 1847, was used for self-study and self-criticism; it served as the source from which he drew much of the material that appeared not only in his great novels War and Peace (1869) and Anna Karenina (1877), but also in his shorter works. Seeking religious justification for his life, Tolstoy evolved a new Christianity based upon his own interpretation of the Gospels. Yasnaya Polyana became a mecca for his many converts. At the age of eighty-two, while away from home, the writer suffered a break down in his health in Astapovo, Riazan, and he died there on November 20, 1910.

---Next month: 'The Bean Trees' by Barbara Kingsolver---