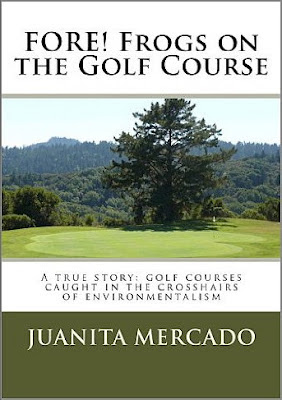 This is a LitWave Event!

The Golf Club rallied its members to the cause. Juanita Mercado, a club member and a geologist, found herself conflicted between a love for golf and a concern over the game's effect on the environment. Using the analytical skills she had as a trained scientist, she identified a third solution for the Sharp Park situation.

The solution had a track record. For years, it had been in place 10 miles away at the Crystal Springs Golf Course located in Burlingame, California. The facility was withinthe critical habitat of the frog species, and, for more than a decade, a certified wildlife sanctuary.

Nowadays, Juanita is a voracious reader. As a first-grader, though, her parents were told she couldn’t read. They acted quickly to remedy the situation. Once she learned, she has not stopped. Ever inquisitive of the unknown and especially curious of scientific forces and phenomena happening around her, her love of reading leads her down the path of research and discovery. Through writing, albeit in a lyrical and narrative style, she finds a channel for sharing these discoveries. Volunteering as a golf coach and learning the game herself, she sees the potential value of further channeling these discoveries through golf and the environment of the golf course. Combining all of her passions, and building on her discoveries while writing the FORE! book, she is presently developing The Natural Laboratory program. The program highlights how science is at play on the golf course. Its inaugural site will be Crystal Springs Golf Course whose management is also excited about the concept.