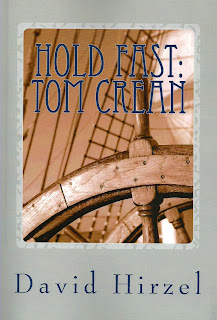 It gives me great pleasure to announce the official launch of my new book Hold Fast: Tom Crean with Shackleton's Endurance 1913-1916, at Florey's Books in Pacifica. Many of you will be familiar with my earlier book Sailor on Ice about this steadfast Irishman's adventures in the Antarctic with Robert Scott's assault on the South Pole in 1910.
In the days before radio communication, the explorers of the icy southern continent were on their own. When disaster strikes, you want a man like Crean in your team. When Shackleton set out to cross the Antarctic continent in 1914, he had with him this most durable and dependable men, a common man in uncommon circumstances, the one who pulled through no matter how daunting the odds.

My new book, Hold Fast continues Crean's story, into the far southern reaches of the sea, where the assault of the moving pack ice sank the ship and doomed the expedition. Unable to make shore, the men lived on the ice until it disintegrated. They made it to the shore of a deserted island, but someone would have to go for help. It meant an open-boat journey over 800 miles of the stormiest seas on earth, and a daring crossing through the high trackless wastes of a frozen island. The men to do it would have to face the deadliest dangers of their lives, and not flinch. Tom Crean was one of those men.
Hold Fast is a work of narrative nonfiction based on published and unpublished sources, and interviews with Crean's family, tells the story as seen through Crean's eyes and sharing his experiences as they unfold.