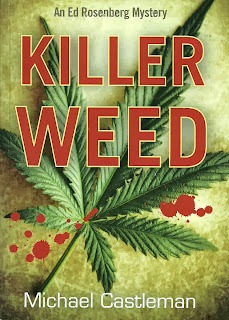 While run­ning for mayor of San Fran­cisco, a for­mer pot dealer and author of best-selling guides to grow­ing weed is assassi­nated. For­mer news­pa­per­man, Ed Rosen­berg is hired to find out what hap­pened to a tech billionaire’s birth mother who was a small-time mar­i­juana dealer shot to death in Golden Gate Park in an unsolved 1968 mur­der. His research about the Haight-Ashbury’s tie-dyed past illu­mi­nates that sto­ried era, and intro­duces him to a rogue’s gallery of aging hip­pies, who, he real­izes, may have been involved in the candidate’s mur­der. Then some­one starts shoot­ing at him…..Killer Weed is a fast-paced, inge­niously plot­ted novel with char­ac­ters so real you’ll want to turn on, tune in, and drop everything to reach the sur­pris­ing, deeply sat­is­fy­ing con­clu­sion.

Michael Castleman grew up in Lynbrook, a Long Island suburb of New York City. He graduated Phi Beta Kappa for the University of Michigan with a degree in English, and earned a Masters in journalism from UC Berkeley. He has lived in San Francisco since 1975. An award-winning medical journalist, he is the author of twelve consumer health and sexuality books. He has published three previous Ed Rosenberg novels.