"Where in the Fog Are You?" Exhibit with Artist Cindy De Losa, Sunday, Nov.3rd at Florey's! 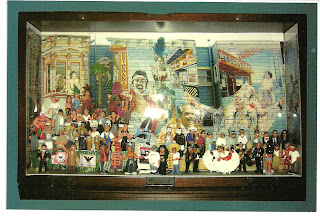 Florey's Books welcomes artist Cindy De Losa as she exhibits her "Homes for the Homies".

See her site for more info and samples of past work:
http://homesforthehomies.com

While shopping at her corner store in Noe Valley she saw a bubble gum machine with individual "Homie"
figurines, she then purchased some shadow boxes and the IDEA was born.

Her style of Art showcases an event capturing the spirit of the "Homies", depicting her neighborhood and
places where she grew up and spent time. This media known as "Diorama" is similar to the "Niche concept",
popular in Mexican Folk Art. Cynthia brings this concept to life together with the "Homie" figurines and photo
backgrounds.

She has also owned the "One Stop Party Shop", worked as an Interior Designer and Property Stager. In addition,
she worked many years for United Airlines, which gave her the opportunity to travel the world.

Cynthia has a son, Alberto Alvarado and a granddaughter, Maria Juanita, the apple of her eye.

Cynthia thanks her Homegirls & Homeboys for joining her in this celebration of "Urban Culture and the Homies".