"The Lore of the Camino de Santiago" Event with Author Jean Mitchell-Lanham, March 1st at Florey's! 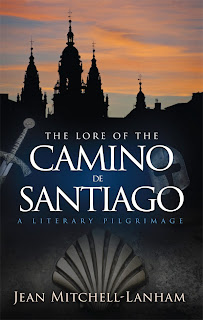 Florey's Books welcomes local author Jean Mitchell-Lanham, as she discusses her new book "The Lore of the Camino de Santiago: A literary Pilgrimage"

People go on the Camino de Santiago pilgrimage for a variety of reasons: religious, midlife crisis, a need for adventure or miracle, to visit Hemingway’s 1920s hangouts, to pay homage to Saint James . . . Author Jean Mitchell-Lanham went for all the same reasons, and then her academic and literary interests set her off on a secondary journey to dig deeper into the mysteries and timeless draw of the pilgrimage.

The result is this book: a comprehensive review—complete with academic, regional, cultural, historical, and religious facts—enhanced by one woman’s real-life journey along the popular 500-mile spiritual trek. As a detailed study of a world-renowned pilgrimage site, the book is now an indispensable read before making the pilgrimage.

This book gives account of the legendary tales and literature that existed during the medieval era up to present day on the pilgrim's route to Santiago starting at the foot of the Pyrenees in France. Inclued are tales from the medieval manuscripts of the Psuedo Turpin and the Codex Calixtinus. We travel down a road filled with stories, through towns that marketed them to their advantage. The epic poems, Chanson de Roland and El Cid along with the poetry of Alfonso the Wise are just a few of the medieval gems. We meet the 16th and 17th century picaresque novels and move right along to the beautiful poems of Rosalia de Castro in the 19th century along with her adversary, the novelist, Emilia Bazan. We meet foreign authors too who link themselves to the Camino. It's a literary adventure you don't want to miss.