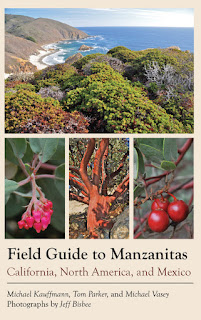 Manzanitas are the familiar shrub with red bark and are the "rock stars" of woody shrub diversity in western North America. Ranging from the Sierra Nevada Mountains to coastal bluffs along the Pacific, from temperate rainforests along the North Coast to arid mountain slopes in Southern California, a wealth of manzanita species and subspecies can be found in an astonishingg arrayof environments. The Bay Area has over half the species reachable by short drives to our natural areas. Two Pacifica residents, Tom Parker and Mike Vasey, will talk about their adventures learning about manzanitas, their ecology and evolution, and talk about the field guide. Seemingly difficult for many botanists, the field guide has a number of features to make it easy to identify these beautiful native plants.

Tom Parker has been a biology professor at San Francisco State University since 1980. He was raised in Texas, attended the University of Texas, Austin, and discovered California in graduate school at UC Santa Barbara. Currently only 9 manzanita species occupy his front yard.

Michael Vasey is an ecologist and conservation biologist. A long time lecturer at San Francisco State in the Biology Department, he is also the Director of the San Francisco Bay National Estuarine Research reserve. He obtained his AB from Dartmouth College, an MA in Ecology and Evolution from San Francisco State, and his Ph.D. from the University of California Santa Cruz.