Pacifica Book Club: 'The Autobiography of Malcolm X', May 31st at Florey's! 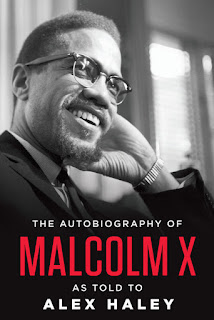 Come by for a chat about our May book, 'The Autobiography of Malcolm X' by Malcolm X as told to Alex Haley.

With its first great victory in the landmark Supreme Court decision "Brown v. Board of Education "in 1954, the civil rights movement gained the powerful momentum it needed to sweep forward into its crucial decade, the 1960s. As voices of protest and change rose above the din of history and false promises, one voice sounded more urgently, more passionately, than the rest. Malcolm X once called the most dangerous man in America challenged the world to listen and learn the truth as he experienced it. And his enduring message is as relevant today as when he first delivered it.
In the searing pages of this classic autobiography, originally published in 1964, Malcolm X, the Muslim leader, firebrand, and anti-integrationist, tells the extraordinary story of his life and the growth of the Black Muslim movement to veteran writer and journalist Alex Haley . In a unique collaboration, Haley worked with Malcolm X for nearly two years, interviewing, listening to, and understanding the most controversial leader of his time.